Crowdfunding Draws in the Crowd 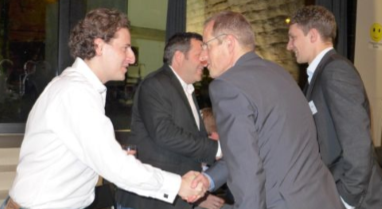 So what are the pros and cons of Crowd Sourcing as a new financing, alternative and what does it mean for the private equity landscape ?

Zürich, February 6, 2013 -Crowd funding does not originate in the world of finance. Fans of the British rock group Marillion are considered the inspiration behind this relatively new phenomenon. In 1997 they raised $60,000 in donations through a fan-based internet campaign to fund a U.S. tour. Since then, crowd financing has been used in support of a wide variety of activities. So how does it work? “It’s a way for a large number of people to invest small amounts of money over the web to fund projects,” Steinberger, who co-founded www.c-crowd.com, the first Swiss crowd funding platform, explains.

According to crowdsourcing.org : “In the Anglo-American world, crowdfunding is already established as an alternative form of fundraising.” Gutenberg explains: “There are 20 platforms in German-speaking Europe and approximately 50 crowd funded projects, […] crowd financing is great but only for a very limited number of applications and companies.” It affords start-ups a lot of visibility and funds they would not otherwise have access to, but it very much remains a niche market. Furthermore, the idea has to be fairly simple to appeal to a large number of people and must be easy to grasp. That’s biotech out the window!

“Companies with a B2C business model which directly deals with the client are ideally suited for this type of funding,” Steinberger explains, “since a large proportion of shareholders also become clients of the company and will spread the word within their network.” Moreover, the regulatory aspect is still quite strong for equity-based crowd funding in general.

When you raise money on a Swiss platform , it’s considered a public offer, so your company must be an AG.

Steinberger’s platform has helped to make two deals so far. “We have raised CHF660,000 of investment, which shows that it has its place,” he says. “We’re not in the same league as Kickstarter,” he explains “but raising CHF 0.5m — CHF 0.75m per company is feasible.” Platforms cannot solicit funds from abroad however, due to the different requirements from one country to another.

“Starting a crowdfunding project is a lot of effort – it does not suffice to put the project on the platform,” Joerg Eisfeld-Reschke, co-author of a survey on crowd funding conducted by crowdsourcing.org, writes. This can be compounded by the worry that someone might steal your idea once it goes public. And in terms of disclosure, problems may emerge later, when the new company has to make public its numbers. “Someone could be a shareholder for just 100 bucks to find out what the competition is like,” Gutenberg remarks.

On the investors’ front there is work to do too: questions to ask and research to perform. “It is a valid form of investment if people want to engage with start-ups,” says Grünstein, whose innovative financial advisory company aims to make retail banking more customer friendly. “If the best projects are in the crowd and an investor can adequately assess the opportunities, they should go for it.”

In terms of the projects themselves, business angels and VCs alike are looking for an investment with a substantial return. Whereas, crowd funding is more about an affinity to a product or service. “It’s more of an emotional decision than a rational one,” Steinberger explains, especially given the smaller amounts of money involved. It is also a fabulous marketing tool. “It’s the best reality check you can get, feedback is immediate. A business angel can’t do that for you,” Hillary Newmayr of UBS enthused.

“If you have a good idea, try to do it with the least intervention possible,” Gutenberg explains. A crowd can be good to get the word out, while a business angel brings a lot of experience and know-how, so perhaps a mix of the two is best, argued Moser, whose closed his Series A financing round in November 2012 using investiere.ch, a hybrid platform. “We have a B2C product and believe that if we have more investors they will spread the word,” he explains. The company also wanted business angels so, in fact, two-thirds of the financing is from them, while the third from crowd funding becomes a marketing tool .

Far From the Madding Crowd

Surprisingly, the challenge of having many shareholders does not necessarily reside in the exit strategy as people might think, but in the many decisions that must be taken in between. And this is of crucial importance to a VC. “We want to stay away from companies with too many shareholders,” Gutenberg explains. “We want to shake hands with three to four shareholders, no more.”

What is the profile of the crowd? “The investor profile is very varied, from CEOs to students, business angels, etc.” Steinberger says. Which begs the question: do these many funders appreciate that they might lose their investment should the venture fail? This is stated on the platforms’ websites (along with a good legal disclaimer!) but perhaps not made sufficiently clear according to Gutenberg and Härtsch.  “The reality is that 85 to 90% of companies need more money than they think so they need more rounds,” Gutenberg explains. But do these funders understand the concept of dilution? Most of the companies will go bankrupt, investors will lose out and they will complain – this from 2011’s business angel of the year! Given  that the majority of investors risk between CHF500 and CHF5,000. Does that make it more palatable?